Frustrated and in pain, Joyce, a Blue Cross and Blue Shield of Vermont member, found the help she needed at the Berlin call center.

Joyce sat in the pouring rain on a rock at the end of the driveway, her broken wrist cradled protectively in her lap and her cell phone gripped against her ear. On hold for more than forty minutes, she held her breath, hoping the weak cell signal wouldn’t drop the call.

It was July, and Joyce had just arrived on Martha’s Vineyard for vacation. While unloading the car, her golf bag got tangled on the steps, throwing Joyce off balance. She put out an arm to catch her fall, breaking her wrist in two places.

“I knew my wrist was broken.”

The only car at the house was an old Jeep with a standard transmission. Joyce drove herself to the hospital, pain rocketing through her arm each time she had to shift gears. After X-rays at the Emergency Room confirmed the fracture, Joyce was told she needed to see an orthopedic physician for a cast.

Her long-time regular doctor was out of town. His new receptionist, thinking she was protecting her employer, kept this information from Joyce. For two days, Joyce sat on that rock at the end of the driveway—one of the few places where she could get cell service. She chased phone calls between the orthopedist who thought they needed a referral, and her primary care office who repeatedly told her, “You just need to come here to be seen,” which would have crushed her daughter’s summer tradition of a week with her cousins. 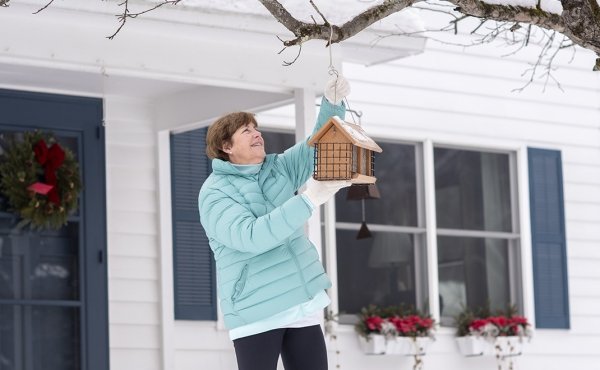 Finally, Joyce called Blue Cross and Blue Shield of Vermont and got on the phone with Terry Lynn at the call center in Berlin. “She just took charge of the whole thing,” said Joyce, “which was a godsend because I was so uncomfortable. I was so tired. I was so frustrated.” At one point, Joyce was trying to take notes and dropped her phone. Reflexively, she reached out to catch the phone and bashed her broken wrist against a dresser, which was excruciating. “I just started crying. I apologized to Terry Lynn and told her ‘I just need a minute. I’m in so much pain.”

“She told me, ‘I am going to take care of you.’ And she did. She did everything. She talked to the doctor’s offices; she faxed the forms. She got all of the information I needed—referral numbers, the NPI number, out-of-pocket estimates, the list went on and on.”

On the fourth day, Joyce finally got her cast, but the experience was eye opening for her. “I just felt that it should not be so difficult for providers to communicate with each other,” she said. “I’m a teacher. I don’t work in the medical field. A lot of times I wasn’t even sure what they were talking about. If Terry Lynn had not stepped in, I don’t know what I would have done.”

With her arm fully healed, Joyce can look back on the experience now with gratitude—for Terry Lynn, for her health, and for the support of Blue Cross. She’s back at her golf game, stronger than ever and looking forward to her annual trip to Martha’s Vineyard next summer.