On November 14, 2021, Corporate Controller Steve Peake celebrated his 27th service anniversary with Blue Cross. While he was mindful of his nearly three decades of service in the healthcare industry, he couldn’t plan for the way this day would change his relationship with health and wellness forever.

Steve woke up that Sunday with pain and pressure in his chest. After days of noticing mild discomfort while exercising, his mind finally caught up with what his heart was telling him: he needed medical help. His wife and daughters out of the house for the morning, Steve called for his 16-year-old son Ben. “He might have been panicked inside, but he didn’t show it,” Steve said, proud of his son who calmly called for an ambulance.

At the hospital, Steve expected to be treated for a minor event. His care team ran through typical treatments including aspirin and nitroglycerin, they monitored his heart with an electrocardiogram, and asked about his pain seemingly every 30 seconds.

Based on his relatively moderate symptoms, the doctors were surprised by what they found.

Thankfully, Steve’s body was able to create alternate pathways for oxygenated blood to reach his heart and be pumped to the rest of his body, which kept him alive long enough to get him from his house to the hospital, and through a lifesaving procedure.

Not all heart attacks are the same, nor have the same positive outcome.

The most common sign of a heart attack is chest pain or pressure but there are many other symptoms. It’s important to note that women may experience less severe heart attack symptoms than men and may not realize they are having a heart attack. 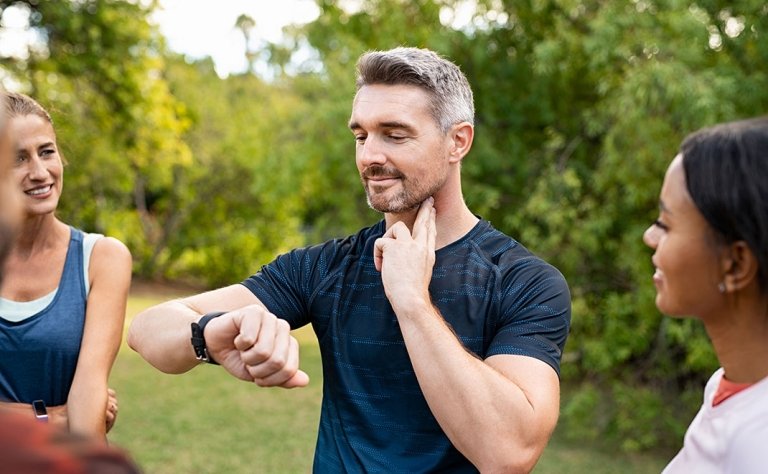 Symptoms of a heart attack include:

“Today, I’m feeling great,” Steve says. Just three months out from this major health event, he’s feeling better than he has in years. Considering himself lucky to be alive, he knows there is a lot of work to be done to keep his heart working as it should and to prevent further blockages in his arteries. Since the pandemic started in 2020, Steve had been exercising more regularly and is continuing to do so as he rehabilitates. In addition to exercise, with the help of his Blue Cross case manager, he will be focusing on improving his diet and mental health.

“It would be a lot easier for me if I liked vegetables,” he jokes, but says that managing his stress levels has been his biggest challenge thus far. “I’m your typical finance personality,” he admits. “I’m introverted and I absorb stress. It’s not natural for me to say ‘I have to stop working, take a break, and relax for a little bit.’ You hear it in various leadership trainings… it’s great that you want to do things for other people but you can’t do any of it if you’re not taking care of yourself.”

Steve is right. Taking care of yourself, especially your heart, is important.

In honor of Heart Health Month, we encourage you to take these steps: